Holiday road trips may have something exciting at the end, but getting there is a whole other story. There’s a reason why the road trip is part of any good family comedy – parents and kids alike start to get a little wacky after being stuck in the car together for umpteen hours.

Your tech gadgets may distract your kids for a little while, but when they’ve had their fill of cartoons, you’ll need something else up your sleeve.

With these ten road trip games prepared ahead of time, you’ll be able to turn a potential temper tantrum into a distracting and fun hour or two.

If you’re in a busy area, you can play this game for as long as it holds everyone’s attention.

This game can go on for a long time, and you’ll get some quiet time as each person thinks of their celebrity’s name.

3. GETTING TO KNOW YOU

You’re bound to learn something new about one another, and questions will spark additional conversation and storytelling.

If you have little ones on the verge of sleeping, an activity that requires focus will tucker them out quickly. 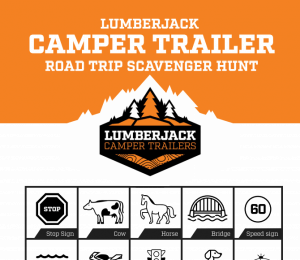 Everyone will pick up this game as they feel like it, but it’s not something you’ll need to focus on for a long period of time. We’ve put together a Lumberjack Australian Scavenger Hunt to print out and use. Get each sheet laminated and buy some whiteboard markers so you can reuse them for many road trips to come.

This is a great game even if you only have one child with you, and it doesn’t have to involve the parents, like traditional I Spy does.

Not only is this game fun and entertaining, but it will strengthen everyone’s memorisation skills.

This game can be adapted in endless ways, with different sentences that have changing adjectives, nouns or verbs. 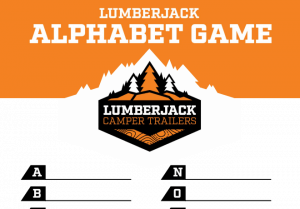 This is a simple game with minimal materials, and the list can be continually added to throughout the whole trip. One of the best things about ti is it is a completely different game depending on where you are road tripping.

We’ve put together a Lumberjack Alphabet Game sheet for you to print out, laminate and keep in backseat pocket of the car for whenever the kids get restless.

Do you have a road trip game that was a hit with your kids? Tell us about it!